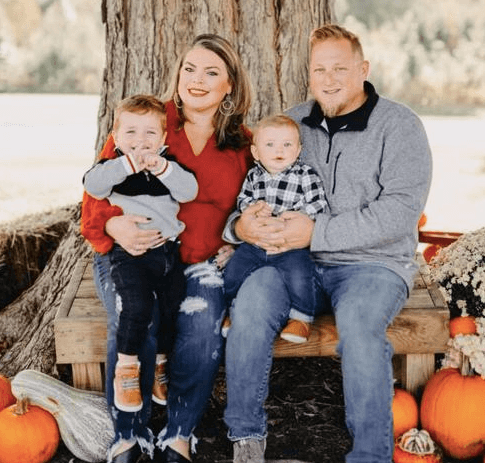 A former classmate recently shared gut-wrenching news on Facebook, and it hit home.

I wanted to write about her tragedy in order to spread awareness about horrifying accidents that happen to kids around water and how they can be prevented.

Lauren Reinke-Breen, a fellow 1997 St. Barnabas Elementary School graduate, posted that her cousin, Ashley Allen, was mourning her 2-year-old son, Vincent, who died during a family vacation in Florida.

Vincent drowned in a family pool on March 25.

One minute, his parents were inside changing him and his 1-year-old brother, Luca, grabbing clothes from the dryer. The next, they were looking around the house for Vinny, only to finally find him in the pool.

As any parent knows, it’s impossible to watch a child every second. Kids can bolt in the blink of an eye.

The news about Vincent was horrifying, to say the least, but Ashley and her husband, Dave, are already working to prevent similar tragedies.

Young children–including babies less than a year old–are taught to roll to the surface of the water, in order to breathe until help arrives. When they’re older, they learn to swim.

In Florida, water is everywhere, and pediatricians frequently promote water safety to families.

Ashley and her family, who now live in Elizabethtown, Ky., had never heard of ISR.

I also had no idea what ISR meant until two years ago, when my niece, Dani Styler, started taking such classes.

Dani, who just turned 6, lives with autism. She is always on the go, and she loves the water.

Our family is fortunate enough to have a summer cottage on a small lake in Michigan, and if Dani is awake, she wants to be in the water.

Of course, Dani’s joy is accompanied by extreme fear in her parents, grandparents and aunts and uncles. It means that Dani basically wears a life jacket from the moment she arrives at the lake to the moment she is back in her carseat to go home. It means making sure the cottage doors are always closed, lest Dani take off to the water. We’ve considered installing an alarm.

But thankfully, these days, Dani knows how to float face up, with a big smile on her face. And if she’s in a pool or a lake, she knows how to swim toward the side of the pool or to a dock.

That’s all because of CAST Water Safety Foundation in Forest Park, where Dani and her brothers, 4-year-old Leo and 1-year-old Teddy, take classes.

It’s jarring watching videos of the three of them being tossed into the water—with an instructor by their side—but it’s amazing watching them roll onto their back and swim to safety.

CAST has done wonders for our family, so much so that when my wife Brigitte and I mourned our stillborn child in January 2021, we decided to have the baby’s obituary include a request for memorial donations to CAST. It was my late mom’s suggestion, and a fine one, as Mom’s always were.

I keep thinking about those ISR classes since learning about Vinny Allen.

Brigitte and I have four children, and it has been on our to-do list to enroll them in classes at CAST.

According to officials, aside from birth defects, drowning is the leading cause of death in the United States for children under 4.

Ashley and Dave were horrified by that statistic.

“It’s just so crazy to me that this number-one cause of death is preventable,” Ashley said. “If only we would have known about [ISR] classes.”

They’re now determined to make sure other parents know about ISR.

The Allen Family has started a GoFundMe account, and proceeds will support the creation of a non-profit organization centered around ISR lesson awareness and accessibility.

They haven’t selected an official name for their organization–that takes time–but it will honor Vinny, a little guy with an infectious smile and a love for dinosaurs and construction vehicles.

Dave works in construction, and he helped build the home next to his family’s.

At times, Vinny would be “cranky,” Ashley said, but the moment he stepped outside and saw those construction vehicles at work, he perked up. He’d even hop in one with his dad and go for a ride.

If someone used the wrong term for a construction vehicle–perhaps saying excavator instead of bulldozer–he corrected them.

Construction vehicles led the procession for Vinny’s funeral on April 2.

It was a small way to honor a boy who knew his ABCs and the names of dinosaurs by the time he was 2.

“He made such a huge impression on everyone he met,” Ashley said, “because he was just so smart, so cute before his time.”

Although bittersweet, solace for Vinny’s parents can be found in the fact that their son has already saved the lives of others.

After he was rushed to a Florida hospital, Vinny’s heart stopped. But, as his parents screamed his name, his heart started beating again.

That allowed Vinny to be transferred to another hospital.

Though Vinny never regained brain activity, doctors were able to save his organs. Vinny’s heart, liver and kidneys were donated to transplant recipients, and his lungs were donated to research.

The couple will always take some comfort in that.

As expected, Ashley and Dave’s loved ones have rallied behind the couple’s non-profit efforts. Family members are helping with the GoFundMe account, and Ashley’s mother, Michele Mattix, a labor and delivery nurse, is now focused on becoming certified in ISR training.

However, that takes time–about eight weeks–and money–between $8,500 and $12,000, according to infantswim.com, the ISR website. Families who want to enroll in ISR classes also must consider the issues of time and money; prices vary, but classes can be about $75 per week.

Proceeds from the GoFundMe account will address those challenges—and even pay for transportation to classes if distance is an issue.

I’m sure that right now all the cliches are ringing true for the Allen Family—they’re experiencing a parent’s worst nightmare, and they keep playing the what-if game.

But, I know other cliches are true. If their efforts to start a non-profit lead to one child’s life being saved, it will be worth it.